Star bricks had been used for sidewalks in Old Richmond beginning in the 19th century, and can still be found in many areas around the city of Richmond to this day. They have a unique historical story. Star Bricks were made famous when they won first place in the St. Louis World’s Fair in 1904. Approximately 600 million were manufactured from the late 1800’s until around 1920 in Nelsonville, Ohio. In a recently posted January 2020 article in the Columbus Dispatch, it mentioned that the famed Star Bricks have not been manufactured for a long time and that can make it challenging to replace damaged or stolen bricks. Furthermore, this irreplaceable nature of the bricks can add to frustration. People do not typically give them up if they have them. According to Nelsonville City Manager Chuck Barga “They have valued and historical significance, so to replace them is frustrating.”
Such sidewalks are still in use in certain older neighborhoods in Richmond’s southside. In time, however, many Star Brick walks had been damaged by tree roots and were gradually replaced by cement ones. Gradually, the City accumulated a large quantity of the distinctive century-old bricks, and fortunately, the Rose Garden was the recipient of several thousand of them , thanks to Mayor Waltermann’s interest in the success of the All-America Garden. It was Mayor Frank Waltermann, in 1987, who suggested that the City should contribute the stockpile of century-old Star Bricks to serve as walkways in the All-American Rose Garden. Given the uniqueness of the Star bricks, it seemed like a logical choice for the Garden paths, given their low maintenance and aesthetic qualities. Recently, in October of 2020, the Star Brick walkways were refurbished and restored as the years, weather, and tree roots along the Southeast end had caused the bricks to separate and become uneven making it difficult to stroll along and enjoy the roses. These Star Brick walkways contribute to the uniqueness of the Garden and are noticed by many who visit. Today Richmond has the distinction of having the only All-America Rose Garden with Star brick walkways. 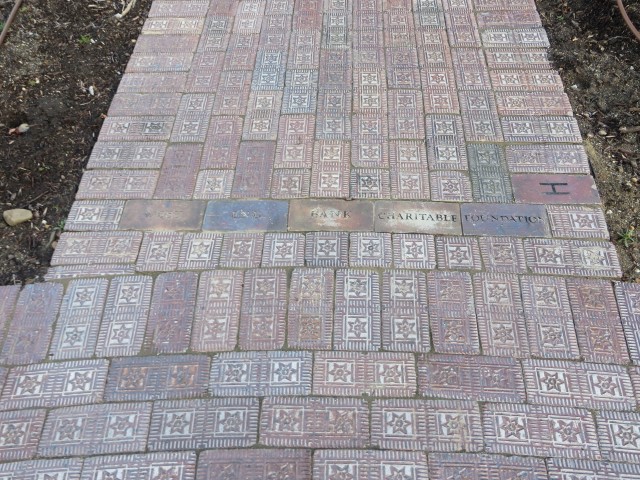